The effects of climate change require a fundamental shift in the building and functioning of our communities, including the way we address and plan for risks.

Historically, cities have relied on “stand-alone” climate adaptation plans as their main vehicle for identifying and understanding local impacts and shaping risk-mitigation strategies. But funding for these plans is scarce and competitive. With the exception of those for sea-level rise planning1, there are very few grants specifically targeting municipal-level climate adaptation planning.

In short, cities are taking action despite the lack of funding by mainstreaming their climate adaptation planning.

With a lack of grant funds available for adaptation planning, the 2018 update to the state adaptation plan (Safeguarding California Plan) called for municipalities to incorporate climate adaptation into existing funding streams—delegated through established planning processes.

In short, cities are taking action despite the lack of funding by mainstreaming their climate adaptation planning. Mainstreaming involves systematically including climate risk and resilience considerations in all relevant planning, decision-making processes, and established operational routines.

One example is embedding climate adaptation considerations and initiatives within municipal activities such as hazard mitigation or climate action planning. Assessing climate risk and incorporating adaptation strategies through this existing planning process enables leaders to immediately address climate change. It could also be the most efficient and effective way to respond to the cross-sectional nature of addressing climate change.

Furthermore, the increased accessibility of climate data and information has reduced the need for each city in California to undertake its own planning process to identify localized climate impacts. The release of nine regional climate assessments offered summaries of relevant impacts, while interactive tools such as Cal-Adapt have provided localized climate data and visualization tools.

The bottom line: cities don’t have to wait or scrounge for funding to start addressing climate risks. They can begin immediately by mainstreaming climate change into their established planning procedures and projects. 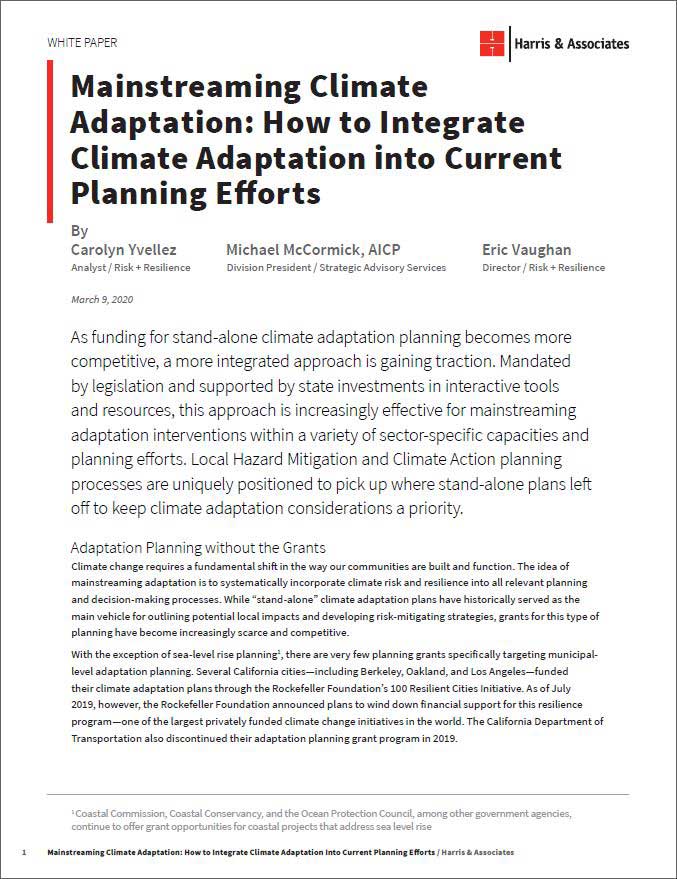